Spicing things up in Banda

We find ourselves, almost by accident at Banda Islands. A group of 10 Islands in the Banda Sea. By accident I mean that we had not intended to sail here (not we crashed into them), however (as is often the case) a hearty recommendation that these islands were awesome from other cruisers, caused us to change our plans and head on over.

An easy anchorage at the foot of a spectacular (albeit dormant) volcano in the bay that is trisected by the 3 main islands of Neira, Banda Besar and Gunung Api (the volcano). The volcano last erupted in 1988, destroying 200 houses and killing 12 people. It also blanketed the nutmeg crops on the neighbouring island, however the soil was greatly improved by the volcanic ash and the following years crop more than made up for the bad harvest.

These Islands are best known as the original home of Nutmeg, although the locals also grow a wide variety of nuts and spices including cloves, cinnamon, vanilla beans, almonds and cashews. The locals happily traded their nutmeg for many years with a wide variety of Arab, Chinese and Javanese traders. However, once the Europeans arrived things went horribly wrong for them. The Dutch in particular who arrived around 1599! The (heavily armed and aggressive) Dutch wanted exclusivity over all the nutmeg and convinced the local elders (﻿orang kaya) to sign an agreement to only trade with them. Upon the Dutch’s return years later, they discovered that the Bandanese had been happily trading with the English and others.

﻿﻿Due to their inability to secure a monopoly on the Nutmeg trade, Jan Pieterszoon Coen, the new governor general of the VOC (Dutch East India Company), ordered the virtual genocide of the Bandanese in 1621. Just a few hundred survivors escaped to the neighbouring Kei Islands. Perhaps I wont mention my Dutch ancestry!

There are many remnants of the Dutch occupancy and we spent a fascinating day exploring two beautiful forts. One restored and one that is home to a few cows and a lot of grass (Benteng Nassau – Fort Nassau). Benteng Belgica – Fort Belgica is built high atop a hill and is a pentagon shaped fort. Built originally in 1611 by the Dutch it has gone through a few transformations and restorations, but was completely restored in 1991.

We found the gates were locked when we arrived, but a Google Translate chat with a chap leaning on a motor bike produced a key (he rode off to get it) and we were in. It is sadly lacking in signage and information, and Occupational Health and Safety would have a field day with the multiple opportunities for serious injury and death, but it was a gorgeous fort.

We organized a Spice Tour for the following day, and a local boat and guide took us over to Banda Besar the largest of the 3 main islands. The tour through the local Dutch built village started with a climb of 220 brightly coloured stairs and into a beautifully maintained forest. The canopy under which the Nutmeg tree grows is made up of 300-year-old Almond (Kenari) trees. The Almond trees shade the nutmeg trees and protect them from the harsh sunlight.

A local land owner shows us the nutmeg picker and technique and I give it a go. We then learn and practice opening the fruit. The Bandanese use the fruit and skin to make jam, they then peel the red alien like covering of the nutmeg (this is mace) and then you have the beautiful shinny nut. Both the nut and the mace are dried out on mats in front of all the local houses.

The tour continues – showing us clove trees, vanilla plantations, cocoa plants, tamarind trees, cashew trees and cinnamon trees. I am amazed that the leaves of both clove and cinnamon trees smell so strongly of those herbs. A street vendor sells us the freshest nutmeg I’m ever going to buy, along with cloves, cinnamon and almonds.

Later that afternoon we hook up with a local woman and partake in a Bandanese cooking class.

She wants to show us 3 traditional Bandanese dishes, sadly for me they all include almonds (I am allergic to almonds), so Jamie gets to do all the tasting. She explains and makes tuna ball soup, eggplant with almond sauce and a tuna salad with almonds. All 3 are delicious according to Jamie and we take the recipes away with us, with the recommendation that they can be made with cashews as well.

The recipe for Tuna Ball Soup is here https://www.lukimyu.com.au/banda-tuna-ball-soup 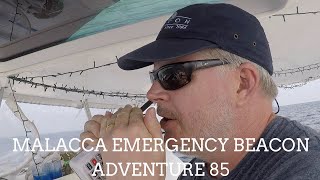